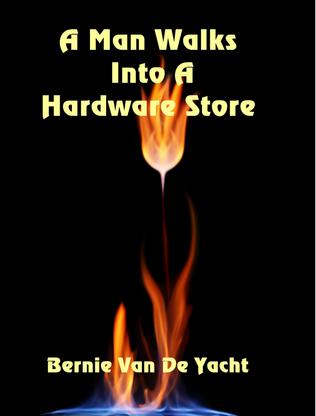 A Man Walks into a Hardware Store

A Man Walks into a Hardware Store, published in 2017 by Solstice Publishing.

#1 Amazon Bestseller with over 350 reviews and an overall 4.4/5 rating.
On Goodreads, it has over a thousand ratings with a 90% overall score.
Available on audiobook by the prestigious W.F. Howes.

This fiction debut by a Southern California screenwriter offers interpersonal melodrama and complicated relationships. The story follows Terry Boyle, a conservative married man who repeatedly encounters curvaceous, aggressive, fearless Renee Patrick, owner of the local Hardware California supply store. Renee’s reputation as Porterville’s resident floozy and remorseless, brazen homewrecker has been well established throughout the years: she’s a woman who doesn’t particularly enjoy the company of men outside of the bedroom and doesn’t believe in marriage because “she’d never seen one work.” Terry’s life at home with a depressed, unstable wife and 7-year-old daughter has become laborious, so making excuses to see Renee seems to breathe new life into his stagnant world. Though she’s depicted as an angry, insatiable man-eater, Renee soon emerges as a multifaceted character. She’s a horse owner who spends time in a barn compassionately tending to her stallion. And she eventually begins to come to terms with her present situation, her future, her critical mother, and a childhood spent with a sexually abusive father. All of these issues surface at a church service after the death of her mother when Renee admits to a desperate need to rehabilitate her image. Meanwhile, Terry’s paranoia about his job stability becomes a reality when he is let go from an insurance company. Aside visiting his therapist, he embarks on a much-needed period of self-reflection. Midway through, Terry’s and Renee’s personal catharses overshadow the mounting sexual tension between them. This narrative element elevates the story from a raunchy seduction yarn to a deeper, more introspective work of fiction, despite an awkward revelation about Terry’s family that he has yet to emotionally process. Van De Yacht’s talents as a storyteller are solid and impressive. Well-structured, the appealing book delivers polished writing and multidimensional characters (Renee says of Terry: “His face had a haunted look. It was eerily reminiscent of the lost potential and unforgiving harshness of a mug shot, yet there was residual evidence suggesting he hadn’t always looked this way”). The novel’s conclusion, flush with the kind of redemptive overtones found in Christian fiction, should satisfy readers, as both Renee and Terry seem ready for renewal, forgiveness, and the blessings of a fresh start.

An unassuming yet potent novel about the power and possibilities of personal transformation after traumatic events.

Soon to be a Motion Picture